Al Kelly. A comedian from Kreva who made US presidents laugh until they cried

On November 25, 1904, Abram Kalisz, a Jew from Kreva, known worldwide as Al Kelly, sailed from Europe with his parents to New York. In the middle of the last century, a genre of double talk – a form of language in which artists used invented and lost phrases alongside common words for fun – was popular in show business. No one could rival Al Kelly, the native of our town, in talking gibberish.

Local historian Aliaksandr Kaminski learned about the connection between the American comedian and Kreva during his research work. Also details of Al Kelly’s life were found in the biographical book “Al Kelly’s double life”, as well as in the American press of the time.

In the book, Abram Kalisz says he was born without any signs of life. They tried to give him mouth-to-mouth resuscitation, poured water over him – nothing helped. Then the midwife, who was assisting in his birth, gathered a bunch of old rags and set them on fire. Black smoke rose to the ceiling, while she occasionally put out the flames and brought the coal to the baby’s nose. The family looked at her like crazy, but everyone waited what would happen next. Abram jokes that if he had been alive at the time and seen everything, he would have been scared to death. After a few minutes he coughed, sneezed, moved his foot and toe.

Eight years later, he set this foot on the American continent for the first time.

In America, a family from Kreva settled in a district of Manhattan. The emigrants were registered at their new address under their Belarusian surname. However, according to Abram, it was impossible to grow up there without a nickname. Very soon in the company of friends he began to be called Al Kelly. This name later became his stage name.

Their home in the US has always been full of people. Many relatives gathered for the evening family concerts. Max, his father, cracked jokes, Mary, his mother, sang with the children, and Abram played the harmonica, to boot. Mother made draniki – potato pancakes with sour cream – for everyone. According to Abram,  she was a true pro in this and knew the secret ingredient that gave strength and resolve to all in difficult times.

Father worked as the chief designer of men’s shirts at a factory in New York City. Abram also got his first job there, while still a teenager. His duty was to roll out huge reams of cloth on the table.

Mountain road to the stage

Al Kelly was a member of New York’s elite The Friars Club. The club brought together outstanding actors, comedians and other show business stars. Along with Kelly’s name, the club includes the names of two other natives of Belarus – the world-famous journalist Larry King and composer Irving Berlin.

Abram Kalisz began his career as a vaudeville comedian. He performed in theaters, clubs, and hotels in the so-called “Borsch Belt,” a resort region in the mountains where American Jewish immigrants usually holidayed. One night Kelly and his associates were driving to a performance at one of these hotels. The road twisted up, then down, and they passed intersections from time to time. The entertainers soon realized that they were lost. If there were any road signs, they were hidden by darkness. At one point they heard the sound of a police siren. The guys had to stop, but the driver confused the brake pedal and the gas pedal, slamming  the “gas” instead – and the car sped even faster. “We flew like wanted thugs who had just robbed a bank,” Al Kelly said. The siren howled louder, they were overtaken and forced to stop on the sidelines. Abram Kalisz tried to explain to the police that they were trying to find their way to the hotel, but his tongue twisted under stress and the words sounded incomprehensible. This confused the policeman and seemed funny to Abram’s friends. In fact, Al Kelly debuted as a double-talker on that mountain road. Soon he tried uttering gibberish from the stage and realized – this was his vocation.

Performed as a “warm-up” artist for Kennedy

In America, the Kreva Jew was a frequent guest on television shows, and starred in movies. Kelly’s shows were attended by everyone from the elite of the day: businessmen, scientists, military generals. US President Franklin Roosevelt, Harry Truman, Dwight Eisenhower and John F. Kennedy laughed at the jokes of the comedian from Kreva. During JFK’s election campaign, Abram Kalisz “warmed up” the public with his gibberish before the politician’s campaign speeches.

One such appearance on stage was the longest speech in Kelly’s life. The presidential candidate was late for his next rally in one of the districts of New York, and the comedian had to entertain the audience for more than an hour instead of the traditional twenty minutes. Al Kelly admits that he started using words that weren’t even in his dictionary, and would hardly have lasted another minute. Fortunately, the future president finally appeared in the hall, walked through the crowd of supporters, took the stage, where he shook hands with the comedian, and sincerely thanked him for  courageously holding the fort.

This case was later mentioned by The New York Times, in the pages of which Kelly’s name was heard as often in those days as from the stage. “One of the future president’s aides gave Mr Kelly the crowd’s reaction to him as an advance speaker. He heard one of the audience say, “This guy would be terrific if only he had his teeth fixed”.

Died to the applause of the public

Kelly had a long-standing heart condition, so he always kept nitroglycerin pills with him in case of an attack. One day the comedian was with his friend Milton Berle when he felt weak and fainted. Berle, who knew about his health condition,  was up to the task helped his friend regain consciousness and immediately asked: “Al, where are your pills?” In Kelly, whose tongue was still tangled after the attack, the answer was incomprehensible. Berle, accustomed to his friend’s double-talk jokes, reacted sharply: “For Christ’s sake, Al, not now!”

On the night of September 6-7, 1966, Abram Kalisz performed at a party in honor of comedian Joe Lewis at the aforementioned The Friars Club. After a brilliant speech to a burst of applause, Kelly returned to his seat, and his heart stopped.

Do you like this text? We’re working on new stories for you! Support us with PayPal. It’s safe and easy! 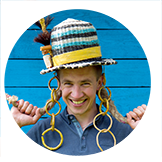 Born in Kreva. A creator of the town’s website.